Today, I have the privilege of introducing you to a gal that is my sister-in-law and also my friend.  Jileane continually inspires me with the diligent and persistent way she pours herself into the creative process.  She is a hardworking, passionate, and gifted artist, through and through.  She is in a band with my brother and they make great music together that you should most definitely check out.  She is also a published author and if you would like to read some of her work, or order her book, be sure to go here. 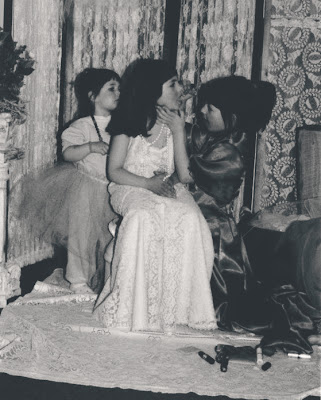 Sprawled across the top of the blankets, I don’t recall the four of us ever actually speaking.  In my memory, the lazy inward flow of the warm sunlight was joined either by the uncontrollable giggles of the four bodies who were just too thrilled to sleep or the deep napping breaths of we three sisters soothed to slumber by the comfort of our mother’s body next to us.  I’m sure there had to be words exchanged at some point, but these memories are feelings, not moments.  Despite the blatant use of a cliché, I know that we spoke of everything and nothing.  We dreamed in the afternoon light, watching dust dance through the beams breaking through the blinds.  Our limbs were a mess of intertwined thoughts and feelings.  We could have stayed there forever.  The worst part was when the phone would ring, because Mum going to answer it meant that the lazy day was over.

For a child, bedtime is the time of day when the toys get put away and you have to brush your teeth.  Obviously bedtime sucks.  The best nights were when Mum would sing us to sleep.  She would tuck us in, turn out the lights, and say goodnight, slowly easing the door shut behind her while we waited with baited breath for the singing to start.  We never knew for sure if it actually would.  All in an instant, she would burst back through the door shouting, “Goooooooodniiiiight!”  We would immediately erupt into giggles.  “Goodnight, goodnight, my love, goodnight!”  The song is actually called “Goodbye,” but we didn’t know that and we didn’t care.  Next would come the only verse of the song she actually remembered.  She has ruined us for this song.  To this day, I only know it by the (wrong) lyrics she sang and by the lyrics she omitted because she didn’t know them.  That song will forever, in my mind, consist of one verse of words followed by one verse of a series of ‘la-la’s.

In eleventh grade Biology class, my teacher threatened to kick me out of the course.  Not the class that day, the course forever.  I told Mum the events of the class that had lead to this threat.  I want to specify that, regardless of my grades, my school history, or what all had transpired to come to this, Mum’s response would have been the same: “Do you want me to go to the school and speak to this teacher and raise some hell?!”  She was irate for my sake.  I could have been failing Biology, or I could have been an honours student.  I could have skipped every other class, or I could have had flawless attendance.  None of that mattered in Mum’s mind.  She was prepared to kick some serious butt to bring justice on behalf of her daughter.  I had to beg her not to go to the school to speak to him.

My mum instilled in her daughters the notion that we don’t just do what we have to in order to finance doing what we love, but we should outright do what we love and make it work.

My mum chose to take our word as truth, even if she knew we were lying to her face.  She wanted us to know that she trusted us, even if we didn’t deserve that trust.

My mum has struggled with and fought for all of her children, sometimes at the same time.

My mum is the strongest woman I know.