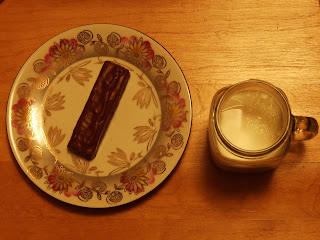 I am nursing my wounded spirits with Snickers and milk tonight. It's tasting pretty good.

Arden and I got home late last night. We went straight to bed after a few deep breaths and a glass of water.

"Are you OK?" Arden asked quietly. I always forget that my worries and troubles show themselves immediately on my wrinkled brow.

I'll break it down for all you blog lurkers.

I didn't get what I wanted.
On Sunday, Arden and I brought home a beautiful Christmas tree. I was ecstatic. We did the big tree excursion with another couple. The boys secured it to the roof of the car with bungee chords. Us girls shivered with delight. Monday morning, Arden gets a phone call from our landlord asking us if we bought a real Christmas tree. Then he proceeded to tell us that real trees aren't allowed in our building because they are a fire hazard, assuring us that it was all outlined in our lease. Our only option? Get rid of it.
Arden broke the news to me gently. My automatic reaction?
"We're NOT getting rid of it." My voice started to shake and little specks of tears appeared promptly.

Wow. I can't believe myself sometimes. I'm just going to go squabble my brains out with our landlord but don't worry hun', I won't get us evicted. I am such a good person.

It's a good thing I decided to sleep on it. I am one crazy lady when I get something in my head.

I decided not to argue the point. I guess I could have argued that it just says, "no combustible materials" in our lease. Seriously. What does "no combustible materials" really mean? I could argue that maybe the fire hazards with cigarettes in the hallway should be removed before my little tree. I could argue that if I wanted to be a fire hazard I would just stick a candle under my curtains thank you very much Mr. Landlord.

Some might think that I should've argued the point because it is the "principles" and "morals" behind the whole situation that matters. Well, for me the tree was the only that mattered. I could've argued until I went batty. I was arguing over a friggin' tree. Um. I'm failing to see my own morals there.

The silver lining on the whole thing is we are still getting a real tree. Just a "Plant size" one. It's going to be the biggest plant you've ever seen.

Furthermore, some dear friends down the street were blessed with a free tree that is real and beautiful and more than anyone could ask for.

Carla said…
awwww... I'm sorry Erika! We've had run-ins with our landlord too. It's so lame and frustrating and annoying when you get told what to do with your little house and stuff. (I'm still laughing about your candles under the curtains though... :D) I love you!
December 5, 2007 at 1:46 PM

Cass said…
That totally sucks. I hate landlords. I've never met one who wasn't a joy-stealin' jerk...at least you have some form of a tree...your indignation reminds me of myself. I get like that too.
December 5, 2007 at 9:11 PM

Elsie Montgomery said…
Oh, been there too, not with a landlord but there are soooo many ways not to get my own way!