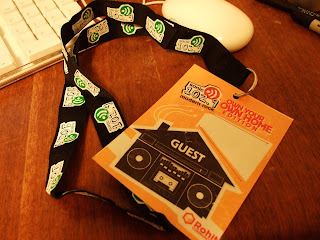 So. Pretty crazy weekend. Just to let you know right off the top. We did not win the house. We weren't expecting to. However... we WERE awarded the 2nd best prize of the evening and walked away hugging each other a lot and shaking our heads a billion times.

The draw for the house was a reverse draw meaning that the last "key" remaining in the bin, won the house. The little party that Sonic put on was pretty sweet. We ran into some friends there, chewed on free appetisers and chatted it up ever so briefly with the big shots from Sonic. They drew 20 keys at a time and just for the record we made it more than half way before being eliminated. We shrugged our shoulders and continued sipping our free beverages thinking,

"Maybe we can win a door prize or a free t-shirt or something."

Oh no it gets quite better. They announced at the beginning that they would be doing a "Live" version of the "Modern Rock Door". This means a very short clip of a song is played and if you can name the song and the artist you win a 1000 big ones. Dollars that is. They decided to switch it up a little bit and draw randomly from the big pot of people who had been disqualified. Two keys were chosen of people who left after being disqualified. Two keys of people that did not know the song. Key number five that was drawn (out of 110 remaining)? Arden's key.

At the beginning of the evening we made a pact with our buddies at our table that we would help each other out if either one of us got drawn on the "Modern Rock Door". They were pretty positive that the 10 second clip was "Alive" by Pearl Jam. Arden gave me a few wide eyed blinks with "We've never won a freaking raffle in our lives, what's happening?" written all over them. I was hooting and screaming at our table. We totally won a thousand dollars. We thanked our table profusely for their help but they refused to let us share any of the money with them.

We can now buy Christmas gifts and pay all our bills over the Christmas season. It's pretty crazy. And we're still shaking our heads about it.

After the party we headed off to see Modest Mouse put on a great show at Edmonton Events Center. We ran into more of the Sonic crew at the show and they congratulated us again. We pretty much feel like we've won a house on the inside. I don't believe in luck or chance so I'm just going to say "Thank you God for providing in a really bizarre way. Who knew You cared for the 'birds of the air and flowers of the fields' via radio?"

Tomorrow it is back to work. Back to evenings at home with old man sweaters, slippers, and being all "domestic" wifey poo and stuff. 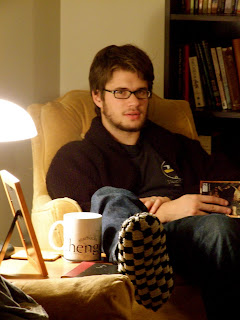 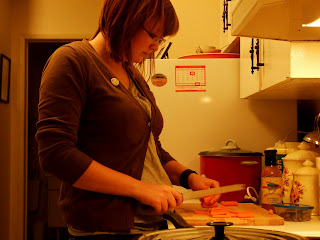 Carla said…
WOW! Congratulations to Erika and Arden. Thank you God for the sweet big present of money.
November 9, 2007 at 9:39 AM