Friday has got to be my favorite day of the week. Chilling at home. Late night movies. Anticipations of sleeping in on Saturday. Sipping Shiraz. It's pretty great.

Fridays are also the day that I have my violin lessons with Mr. Keene. I was telling a friend the other day how after every lesson I walk away shaking my head thinking, "He can NOT be real." He's a pretty phenomenal teacher to have, and I must say he is the best I have had yet. Every lesson I seem to learn something new and pretty magical about that man. My favorite Mr. Keene quote of this lesson being...

*after discussing the staccato markings (which are normally made with a dot) of the new piece I am working on.*

"Germans use dots like Americans use ketchup. They just spread it everywhere."

He gave me a new piece to work on today... I must say, I'm a little scared of it.

He told me today, "The ending's a hoot!"

Here's a little clip of the piece. The kicking ending he spoke of is the 2nd line down. Those are a lot of notes. 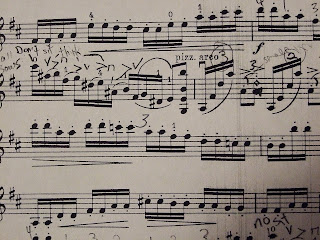 Arden and I are off to see this band play tonight. Two different friends have given these takes on their live show. One said, "Best show of his life... they tie with Sigur Ros" That's pretty intense. Other friend said, "Worst show of his life. Lots of random mumblings in microphone." Hmmmm. Should be an interesting night.

Tomorrow is the BIG draw for the BIG house and BIG things. We're pretty certain we're not going to win, but we have just as much chance as anyone there... so who IS it? After stuffing ourselves with the free appetisers that will be at the draw we're going to get to see this band. The show sold out in ten minutes. Tickets are now being sold on ebay for 200 bucks. Should be sweet!