Arden and I played music with some friends on Saturday at the silent auction that our church put on. It was an awesome time to just sit back and play and sing beautiful melodies. I even had a chance to browse the tables during the auction time. I stumbled upon this cheery vintage duvet cover and brought it home for a whopping 5 bucks and I'm lovin' it. 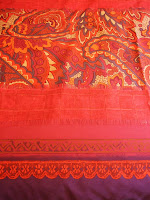 I even found a little vintage yellow glass container. I spruced it up with a little autumn bling and now I feel ready for October. 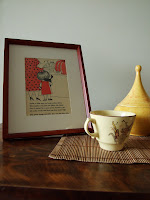 After the auction Arden and I booted it down town to see a band that is new to me, but has been one of Arden's favorites for a long time. Built to Spill, the fathers of Indy Rock. Arden has gladly been giving me random bits of trivia over the past couple of weeks as we've been anticipating this show. I guess that this band only has 3 permanent members. They wanted to be known as a "jam band" and stay open to what others have to offer. They are quite "under the radar" so to speak but have surprisingly put out around 10 albums since 1993. They didn't sell a stitch of merchandise at the show. No t-shirts, CDs, or buttons. Just live music. They had art pieces that were painted by a friend of theirs scanned on a computer and projected throughout the show. Their electric guitarist had "Say NO to corporations!" painted on his guitar and the lead singer's guitar was painted by his son and sported "BEN" in bright colors on the side. They set up, and tore down their own gear. No roadies. Yup. Definitely indy. Despite how under the radar they are it was a sell out show with standing room only! They looked like they were all nearing fifty years old with grey hair and receding hair lines, but boy could they rock. It was quite a show but they were really gracious performers. At one point the lead singer asked if anyone wanted to play basketball with him the following morning. They finished their encore with a timid look out to the crowd, a wide grin and a, "Thanks guys, that was really fun." into the mic.
The show didn't end until 1am but Arden and I still strolled up Jasper Avenue talking about the show and scouring bulletin boards for a poster to add to our collection. It was pretty chilly out. We walked arm in arm and the leaves swirled around our feet. It was so serene I didn't even notice the noisy bar goers down the road. 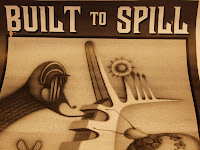 Time to finish whatever is left of my morning smoothie and get this Monday going. 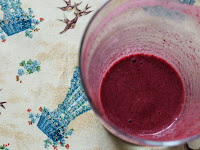