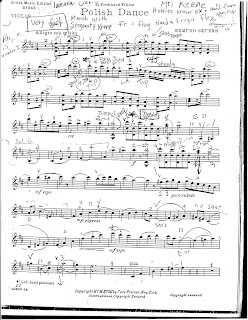 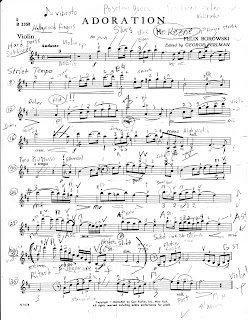 Yesterday I had my first violin lesson with Mr. Keene. I spent the morning reviewing a piece to play for him, bottled my nerves in a cup of coffee and headed out to his studio on the bus.

Once I reached his studio I took a deep breath and walked up the steps on the side of the building like he instructed me to do when I arrived. I rang the door bell and after hearing no response turned the knob and poked my head in the door. There was someone playing a lively Paganini piece in the other room. The door opened and a smiling gentlemen with salt 'n pepper colored hair, and glasses disheveled greeted me with a, "Why hello there dear, I'm just finishing up in here, I'll be right with you."

Five minutes later a young man exited and Mr. Keene called me in. His studio was brightly lit with pictures of him fishing everywhere. A beautiful baby grand piano sat in the corner. Sheet music was stacked haphazardly on the floor, in corners, on end tables, and on piano benches. On one wall a large shelf held even more stacks of sheet music. Mr. Keene informed me later, "I'm pretty sure that I have the largest collection of music in all of Edmonton." Noooooo doubt. A peculiar looking stringed instrument hung in one corner. It looked like it was hundreds of years old.

We started by talking a little bit about my education, where I lived overseas, and what kind of music I've been playing these days. When I told him a little bit about jazz, Mr. Keene took off his glasses and looked out his big bay window.

I showed him some of the music I brought, then he asked me,
"What instrument are you playing on these days?"

I handed him my violin and he immediately whipped out some furious line of a piece I've never heard before but sounded amazing.

"Well your pegs or horrible. If I can do anything for you today it will be to fix them." He proceeded to take off all the strings on my violin, rub some "peg dope" on it as he called it, restring my violin, and then re-tune it.

"There, that will work much better for you dear."

He then asked me to play a little. I placed a piece by Charles Dancla on the stand and played. I grimaced at a couple notes while I was playing, but overall it went pretty good. When I finished I timidly looked up.

He took off his glasses, sighed and said,

"Well dear, it is quite obvious you can play. You have one of the most beautiful forms of vibrato I have ever heard."

"Hold on, you did not just say that!" I was thinking. My old teacher always got on my case with my vibrato, saying it was not proper, "to the classical form." I was just doing what came naturally. Now Mr. Keene, who was concert master of the Edmonton Symphony for over 20 years tells me I have awesome vibrato. Woa.

He gave me 2 pieces to work on. A "Polish Dance" by Edmund Severn and a piece called "Adoration" by Felix Borowski. They are probably the most technically challenging ones I've attempted yet, and I'm a little nervous, but they are also two of the most passionate songs I've heard in a while.

I will definitely have enough practicing to keep me busy. I am so excited and a little overwhelmed that I will get to learn under Mr. Keene, and that he is willing to teach and work with me. Wow.
Email Post

Elsie Montgomery said…
A tear of excitement in my eye for you as I read this... imagine the flood if I had any musical talent at all... but I love you and yours... and can hardly wait to hear you play again.